This is the third of three posts on this topic. You can read Parts I & II here and here.

The Home for Old Men and Aged Couples and St. Luke’s Home for Indigent Females

​Both of these homes, developed by New York’s Protestant Episcopal Church, were in Morningside Heights, to the north of our Bloomingdale neighborhood. They were both founded by The Reverend Dr. Isaac Tuttle, Rector of St. Luke’s Church. He first established a home for women in 1852 at 543 Hudson Street, for “gentlewomen in reduced circumstance.” When larger space was needed in 1859, the women were moved to a house next to the church at 487 Hudson Street. The congregation of the church and their friends supplied all the needs of the home.

By 1872, the home for women was relocated to Madison Avenue and 89th Street. Meanwhile, seeing the need for care developing for elderly men, Rev. Tuttle formed the Home for Aged Men and Aged Couples in the building at 487 Hudson Street. The men were “rescued from lonely want and suffering” and aged couples were “saved from the bitterness of separation.”

When the Cathedral of St. John the Divine construction began in the 1890s, the Episcopal Church moved both homes to the Morningside Heights neighborhood. The Home for Old Men and Aged Couples was moved into a new five-story building at Amsterdam Avenue and 112th Street, on the northwest corner, across the street from the Cathedral. The land was purchased in 1897 and the home opened the following year. The St. Luke’s Home for Aged Women was built in 1899 at 2914 Broadway, at 114th Street. The Home for Old Men and Aged Couples had a “Board of Lady Associates” in addition to its regular Board.

Both homes required admission payments: in 1921 the fee was $500 for the women at St. Luke’s, $400 for the men and $700 for a couple in the Home for Old Men and Aged Couples. Applicants had to be resident of the City for five years, 60 years or older, and a member of one of the City’s Episcopal Churches.

​The two homes were only in the news when a bequest was made or when a fundraising “fair” was held. Certain men who had careers in the clergy or academia were worthy of an obituary in The New York Times. In fact, one description of the Home said it “cares for persons of the intellectual and business class.” The St. Luke’s Home for Aged Women used the resident’s sewing skills to make clothing for the children of the Episcopal Church’s Sheltering Arms Orphanage.

In 1928, the Episcopal Diocese held a fundraising dinner to kick off a campaign and announced a gift of $250,000. Their campaign to expand the Home must have been successful because later, in the 1970s, when the Home was closed, it was comprised of two buildings.

In the 1970s, most likely due to the new federal regulations, St. Luke’s Home combined with the Peabody Home in the Bronx, another Episcopal Church Home, formed a corporate entity called Morningside House which was not an Episcopal Church organization. Eventually both moved into the same new building in the Bronx.

Meanwhile, the Home for Old Men and Aged Women incorporated separately from the Episcopal Church and eventually became the Amsterdam Nursing Home we have today. For a time in 1970, a group of squatters took over the empty buildings of the Home at 112th Street, handling the care of the building, and even convincing the Episcopal Diocese to provide heat for them that winter. Two of the squatters interviewed in the Times said that squatting there was much better than their housing on Manhattan Avenue near 100th Street.

​By the 1950s, another home for care of the aged had opened in Bloomingdale, the Lynwood Nursing Home, in a brownstone built in 1902.  Research on the facility has not uncovered who was the operator and exactly when the home opened; one listing described it as “proprietary.” It appears to have been in operation by the 1950s, based on obituaries in the New York Times for those who passed away there. It was still in operation until the 1980s. The obituaries found were typically for actresses, lawyers, and writers, people who were not poor, and giving an air of gentility to the home. When the federal government began to warn nursing home operators in 1974 that they were not meeting regulations, the Lynwood was on the list of those warned. Today the site is a home for recovering addicts owned by St. Luke’s Hospital.

​The Infamous Towers Nursing Home
Writing about nursing homes in our neighborhood would not be complete without the events of the 1970s when the nursing home scandal played out right here, at the Towers Nursing Home on Central Park West at 106th Street.  The distinctive round towers gave the building its name. 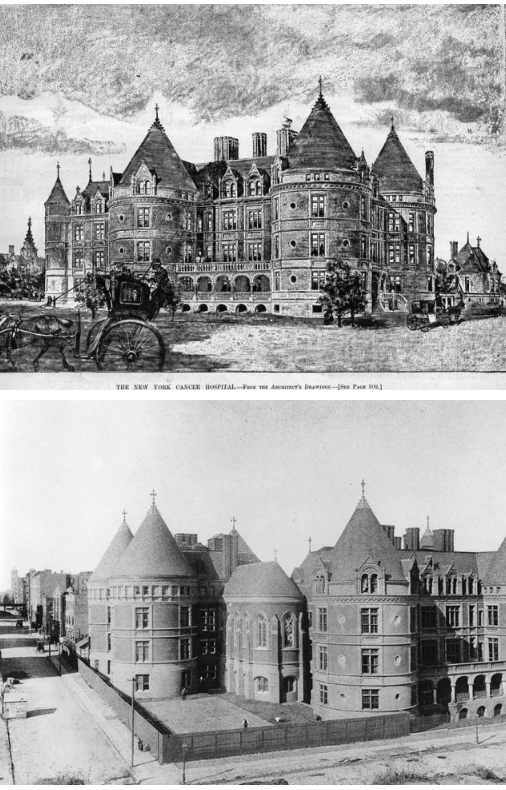 Charles Haight’s stone building has been a distinctive feature in Bloomingdale since it was built for the New York Cancer Hospital in three sections, from 1884 to 1890. Later, the health care facility was named The General Memorial Hospital for the Treatment of Cancer and Allied Diseases. In the 1950s, when the hospital withdrew from the site, Rabbi Bernard Bergman turned it into a nursing home, one of many in his “syndicate” that grew over the years. He also owned the Park Crescent at Riverside Drive and 87th Street, and the Mayflower at West End Ave and 89th Street, both former hotels that were converted.

In a series of articles in the mid-1950s, the New York Times detailed the growth of the population in the United States of over-65 adults* sounding the alarm about health care costs that could wipe out a life’s savings, and the lack of sufficient care facilities for the elderly. By the 1960s, Medicare and Medicaid were enacted, and then the nursing home business became one of the fastest growing in the United States.

Elderly people who used up their resources were moved into Medicaid automatically. The federal funding of homes for the aged was a challenge to the old-fashioned nonprofit homes of our neighborhood, as they struggled to meet the new rules. But for proprietary homes, the federal funds underwrote what became a real estate development opportunity.

Bergman’s Towers Nursing Home at 2 West 106th Street had been labeled “appalling” by the early 1970s, with firetraps, medical inattention, and filthy conditions noted, but Bergman’s ties to local legislators were strong. Somehow, he and other operators managed to get the inspection process moved from the City to the State of New York where they had more control. John L. Hess of the The New York Times began a regular drumbeat of stories in 1973 and 1974. Assembly Member Andrew Stein was appointed by Governor Rockefeller to open an inquiry, soon coupled with another investigation by the U.S. Senate. What emerged from all this was the full story of the deception and administrative mismanagement of the operators in the Medicaid system, with the Towers standing for all that was wrong. The abuse of the elderly was almost a side-story, as the charges brought against Bergman were financial: stealing and tax-evasion.

As Bergman’s property was sold off to pay back his debt to the State, the Towers was landmarked in 1976 but then sat empty for many years, an eyesore and reminder of what had happened there.

The scandal of the 1970s changed the rules for nursing home operations, but now, years later, we may be on the edge of another with “assisted living” the next group of elderly care facilities needing attention. Since there are no federal dollars involved, oversight remains at the state level, where regulations vary widely.

Meanwhile, our society continues to grapple with how to care for the infirm aged while simultaneously reshaping this period of the human lifespan into a fulfilling time.

*According to the article, one in twelve adults was over 65 in 1955; today it is one in seven.

Aging In America, Inc. “Serving the Elderly with Care and Compassion Since 1852” (report at www.aginginamerica.org)   (History of Episcopal Church institutions)

American Society on Aging, “A Brief History of Aging Services in the United States” (www.asaging.og/blog)

Association for the Relief of Respectable Aged Indigent Females, various Annual Reports (1814-1914), on microfilm at The New York Public Library

Bangs, Mrs. Julia A. An Historic Outline of the Methodist Episcopal Home in the City of New York, New York, 1893 (accessed through Google Books)

Museum of the City of New York, photo collection

Weiler, N. Sue “Religion, Ethnicity and the Development of Private Homes for the Aged” Journal of American Ethnic History, Vol 12, No. 1, Fall 1992

What a fascinating history. It’s an important part of Bloomingdale and thank you for making it known.

Yes, thank you for all this research and a fascinating history of the area.

A Tribute to the Life and Legacy of RBG Comes to the New-York Historical Society; ‘Not Done Yet’